Today I was attempting to determine the hardware audio latency of a MacBook Pro (late-2009 model, 2.8GHz dual-core 17″). This was to plug in to the Driver Error Compensation setting under Preferences > Audio in Ableton Live 8. I was following the Driver Error Compensation tutorial that ships with Live, and hooked the headphone output to the line input on the side of the MacBook. I used a straight-through 1/8″ TRS cable – two of them, in fact, which I also verified for correct wiring with a meter, afterÂ discovering a few disturbing facts.

First, something is out of phase, either the input or the output. When the output waveform zigs up, the recorded waveform zags down. That could be troublesome in certain circumstances.

Second, the actual latency changes every time you disconnect and reconnect the cable plugged in to the headphone jack. Apparently, the Mac is reconfiguring its drivers, so that it knows what’s connected where, or something. But when it does this, the latency changes! A lot! While the cable is connected, it doesn’t seem to vary, but since the connector is so delicate (and over-engineered, sigh..) it is easy to accidentally dislodge the cable a tiny bit, which is enough to trigger this problem.

Each of the two screenshots above show the playback waveform (top) and the recorded waveform (bottom). You can see the phase difference, and I included two examples that were on the more extreme ends of the range of latency. The time scale along the bottom is in fractions of seconds. You can see that the latency has changed from approximately 0.0025s to 0.0225s – that’s a 20ms difference! Why the heck does it do this?

Moral of the story: buy a professional audio interface for any serious recording work.

Fresh from the studio I bring you three twisted ambient soundscapes for a dark film.

Nine and a half minutes of psychotic ambient soundscape, crafted with a ghoul’s hammer in the forges of hell – or, at least, crafted by my hands with vintage synthesizers. Richard D. James would approve, I hope, and his fans will appreciate this subtly disturbing trip through a quiet alien landscape. It will make a fine backdrop to broken imagery. Please note: a subwoofer or good headphones are required to listen – it’s 90% sub-bass and you won’t hear much at all on, say, laptop speakers. This track is entitled “Isoscelation”.

When you are exploring forbidden ruins on another plane, you cannot expect anything other than bizarre and terrifying bumps in the night. From the other room that you thought you saw, maybe just down the hall, beyond something that shouldn’t be there, it moves. Pray it didn’t smell you. This track is entitled “Mechanical Chair”.

You are the only one left. You did not escape unscathed. You left your friends behind, and hope for nothing more to forget them forever. Something has to play at your funeral. This track is entitled “A Long Sleep”.

No, there is no sanity.

My good friend and amazing musician Jonny Diina came home to Buffalo, and he asked if we could shoot a video of him playing some of his tunes on his mom’s Steinway baby grand. We had two shiny new Canon XH-A1 HD video cameras, a Mackie 1202 mixer, Audio-Technica AT2020 condenser mic for vocals, and a pair of condenser mics I borrowed from an audio friend in X-Y configuration over the piano soundboard.

One camera was on tripod, with my cameraman zooming in and out a wee bit too much (forgivable, he was new!) and the other camera was hand-held. I didn’t have time to build a steadycam gizmo, but it still came out ok.

The major technical snafu of the day was this: we had the audio configured to be a mixdown of the piano XY in one channel, and vocals to the other channel going into the main camera. This would have given me the flexibility to balance and eq the mix in post, and given that the target was YouTube, stereo piano from the XY pair wasn’t a priority. Somehow, the camera got set to record only one of the two audio tracks! I don’t know how, but at the time the cameras were new toys and this is one of the first shoots we did, so it got screwed up. Luckily the sound was usable, if not stellar as intended. Shit happens!

Here’s a photo of my little music studio. There’s probably been some toys added since it was taken, I like collecting things with knobs, buttons, and lights. 😉 Not seen are several turntables and other misc. instruments. 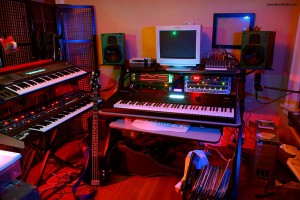