Winter is coming, and the Northeastern United States where I live can get cold! And the houses are often old and drafty. So I built a wireless sensor system tied to a Nest thermostat to keep me cozy, wherever I am in the house, instead of keeping my thermostat cozy, bolted to its wall.

I did this with Texas Instruments’ Sensortags, a Beaglebone Black, DeviceHive for device registration and management, and a Nest thermostat.

This one was coded up using Python to speak Bluetooth LE to the Sensortags, and JavaScript on Node.js to do the device registration and telemetry messaging.

Yeah, they call it Bluetooth Smart now, but I don’t like that name! LE for me. 😉

DeviceHive managed the device registration for Sensortags, to make it easy to add new tags and wrangle them, and the wot.io data service exchange piped the messaging to scriptr for some transform logic in a convenient cloud service. bip.io did visualization and Nest control, and Circonus handled data logging and analytics.

And the code is on GitHub!

This is the video I made to go along with the rest:

Recently assembled my shiny new Novena laptop, and decided to make a time-lapse video of the assembly process. Shot in 4k on RED – because one awesome tech deserves another!

In the video, you’ll see that I use threadlocker everywhere. I’m a big fan of the stuff, and in my opinion so very many of the so-called maker projects and kits out there should be recommending it. Especially the ones full of stepper motors and other vibrating bits, that are made of wood or acrylic, which prevents you from pre-tensioning the bolts correctly because you’ll crush or crack the chassis.

I also spill superglue all over my hands, when a tube decides to goosh out everywhere. (was securing one of the peek array threaded inserts, that pulled out while trying to install a speaker) That was fun, trying to not touch anything for a few minutes until it dried, and then going at it with acetone… I do not recommend gooshing superglue all over your hands. Avoid.

Very excited to dive into this phenomenal hardware hacking platform. Thanks, bunnie and xobs!

Tonight I ran across a problem using a Wacom Intuos3 tablet with Adobe After Effects CS5.5. The pen pressure would not work with the brush tool in AE, and the brush acted as if I was using a plain old mouse. Having some detailed work to do, I needed both the Wacom pen input and pressure sensitivity, which I’ve fallen in love with for Photoshop use. (Seriously – if you do any significant amount of Photoshop work, get a Wacom tablet. It’s the best money you’ll spend.)

Since I’ve had far too many years of professionally dealing with PC troubleshooting, I went through all the normal steps you might expect: uninstall and reinstall the drivers, install different driver versions, blow away the preferences file, restart Windows, etc. Nothing worked. To be clear: this is a 64-bit install of Windows 7, and I tried Wacom driver versions 6.1.6-7 and 6.1.7-3, with the latest After Effects CS5.5 updates (reported as version 10.5.0.253).

It struck me that the pen was working much like a mouse, I could gleefully get motion and clicking, but no pressure, tilt, or any of the good stuff. Remember, this is only in After Effects; the pen worked fine in Photoshop. During one of my uninstall / reboot / reinstall iterations, I noticed that Windows picked up the Wacom Intuos3 as a mouse, but of course nothing used the tablet features because there were no drivers installed. So, I checked the Device Manager, and found that there was a generic  “HID-compliant mouse” installed for the tablet. I verified the Vendor ID, and also unplugged my regular mouse to be certain it was the tablet. It was.

This made me suspect that perhaps After Effects was binding to a mouse driver before it got around to the Wacom tablet driver, precipitating the pressureless performance of the pen. I reinstalled the latest Wacom drivers, and checked back with the Device Manager, and found this: 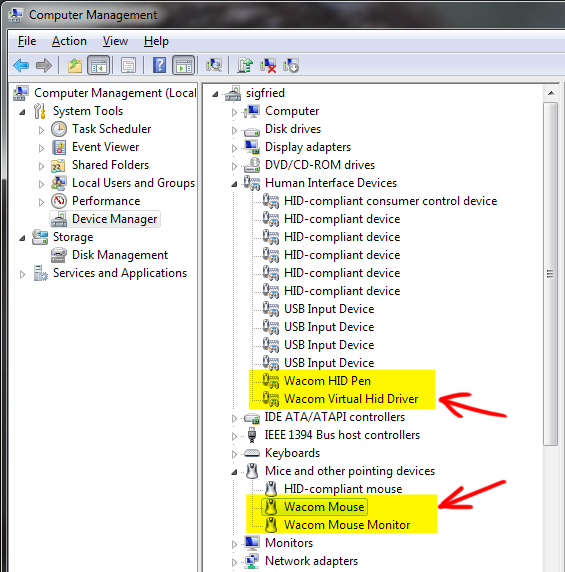 Notice that there are at least four devices associated with the Wacom Intuos3 tablet, which I highlighted in yellow. Two of them, under the Pointing Devices grouping, seemed very mouse-like, and probably serve to drive the pointer around. The other two, listed under Human Interface Devices, smelled a bit more tablet-specific, and probably provide the pressure, tilt, and other fun stuff to applications. This is just a guess on my part.

It worked! Lovely, glorious pressure sensitivity! I could brush my roto masks with finesse! Retouching became fun instead of a chore! The promise of the pen was fulfilled! Oh, happy day.

My guess here is there is a bug on the Adobe end of things, whereby AE is binding to the mouse-flavoured drivers in lieu of the tablet-flavoured oens. I’ll go file a bug report with them shortly, and hopefully it will get cleared up in the next release. But for now, we have a workaround for the Wacom pen pressure not working in After Effects for the Brush tool:

And there we have it. A working, if annoying, method to enable Pen Pressure in After Effects!

Update: After you do this, if you use Wacom’s mouse on the tablet at all, AE will switch back to mouse mode and not use pressure with the pen. So, keep the mouse away from the pad! You can use a regular mouse just fine, but the tablet mouse will switch things back to sucky mode.

So, I’m working on all the postproduction for Binary Samurai, and I’m doing it with Adobe Creative Suite CS5.5 – Premiere Pro for the edit, which is done, and After Effects for the VFX. As many resources as are out there already, I couldn’t find much information on best practices for managing a project the size and scope of a full feature film. Even with a great book on AE VFX work by my side (highly recommended btw), I still had questions! Things like, do you break things up into individual project files, or use one giant one? Can Dynamic Link come into play effectively? Many more.

Since I couldn’t find any answers, I’ve been blazing ahead and devising my own. I decided to contribute to anyone who may have the same questions by posting an ongoing log of my experiences here. Adobe has come a long, long way with their Creative Suite products when it comes to video, and they are more than ready to tackle the big jobs. Stay tuned for more! 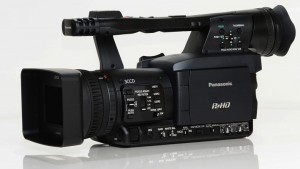 Today I had to transfer a lot of DVCPRO HD footage from a Panasonic AG-HPX170 camera. I discovered that the USB 2.0 port transferred easily twice as fast, if not faster, as the 1394 FireWire port, when connected to a Macbook Pro. This was a surprising result! I suppose the FireWire port is more useful for direct video capture and monitoring than it is for transferring video from the P2 media cards. Adobe OnLocation plus a laptop with a high-resolution screen makes for a great field monitor, with scopes and annotation tools included!

And praise to Panasonic for releasing an update to P2CMS that now works with Snow Leopard!