A nice young lady who goes by the monkier Vanity Kills has authored a splendid review of the Lip Service fashion show that was held at the Auxiliary Magaizine release party. I was there with camera in hand, and along with Clark Dever, the official event photographer (hey Clark, awesome photos, let’s chat sometime!), Ms. Kills featured a few of my photos as well! Many thanks, Vanity Kills! If you’d like to check out the review, and you know you want to, you will find it here: http://www.lip-service.com/webzine/?p=1166

Auxiliary Magazine hosted a release party for their new issue, and Lip Service showed up with a fashion show. Fantastic clothing designs, beautiful models, amazing music! Below you’ll find some of my pictures.

This was a challenging shoot due to low light, even lower than a typical fashion show, because it was at a nightclub. I came prepared for that, with a flash cable, gels, etc – my evil plan was to bounce the flash off whatever ceiling/wall/whatever was nearby to get a soft light on the models, and hopefully see a faster shutter. Well, my hopes and CTO-corrected photons were thoroughly dashed upon the black-painted ceiling – black is not very reflective! The walls weren’t much better. I tried using everything around me in some test shots before the show, but damned if I could get enough light reflecting to make a difference or produce an amazing image. The mirrored wall worked, but a mirror doesn’t diffuse light and it looked like crap.

I went on-camera with the flash, which I hate to do, but it was the only way left to me at the time to get any pictures at all. The models were moving quickly, from one sexy pose to the next, so a slow shutter in low light will not work! Shot everything in RAW because the lighting was very inconsistent along the length of the runway, and everything moved so fast there’s no time to adjust for perfection on the spot. Of course due to the same reasons, I couldn’t batch all the RAW files, and had to sit there for two hours adjusting each one by hand. Keep that in mind if you shoot RAW! Consistency equals batching. Batching yeilds free time. Evolution through obedience. Oh, wait, that’s something else…

If you were involved in the show and would like to use these photos, you are welcome to, just email me and I can get you what you need!

END_OF_DOCUMENT_TOKEN_TO_BE_REPLACED 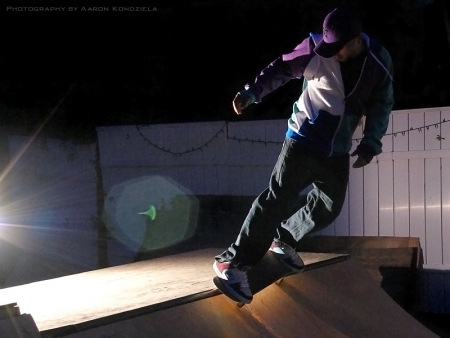 Sparks flew as steel was cut, smiles broke through the pain of ink needling its way into skin, and the flames from the pit warmed everyone’s soul. A great evening. Here are a few shots for your enjoyment.

Those sparks are awesome. That’s Wagner there, with the angle grinder.

Kate thinks she looks silly in that pic, but I think it’s quite flattering.

Kyle was chillin with kate around the fire pit. He’s got a nice angular profile, and the lighting was right.

As promised, you may download a zip archive of the Cleric production photos (121MB). Enjoy!

Wrap party for the film shoot for Cleric.

It’s a wrap, folks! Scorpion vodka and cigars for all. 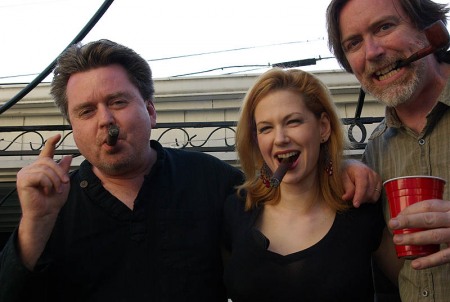