Desperation leads to crazy solutions. I had a nice shot lined up down a narrow crawlspace, but the foreground end of it was pitch black. We had no lights, no genny, no power, no battery-powered lanterns*, nothing. The way the sun and windows were angled made Â it impossible to bounce any light to my actor. But I wanted the shot! With nothing to work with, what could we do? 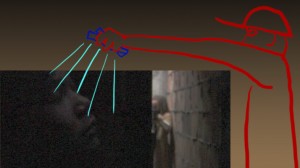 One thought on “Saving a Shot with Neat Video”